A philosopher friend always preaches: ‘It doesn’t matter who you are but how you see yourself.’ If you ask me, I would rather chirp only after consulting the wife.

Nonetheless, I see myself as a brave, bold man. Yes, I do. When I look into a mirror, my biceps and triceps grow out to octaceps, and my protruding belly doesn’t resemble a piglet’s, as my friends often remark, rather it is a multi-packed assortment – way ahead of a gym instructor’s six-packs.

However, last month I had a very peculiar experience. No, not that I had to part with a hefty sum of my hard-earned money, but a sweet, intelligent lady outwitted my smartness, and cracked my pride. The only fact that still haunts me is that I had never known her before I received that phone call. But what an angel she was! I tell you!

If you trust my sense of judgement, she was 5’6’’; had long, black hair; pointed nose, and wore an extra large Bindi. And she had that slurry, deep voice that could make a man yearn for a mug of whiskey.

And she had that slurry, deep voice that could make a man yearn for a mug of whiskey.

I picked up the unknown number.
‘How are you, Sirrr?’
O, that rise and fall of the syllables! I thought it was someone I’ve intimately known in the past, but I couldn’t remember.

‘Who is this?’
‘Sirrrr, this is Sheila.’ [The identity of the caller has been intentionally revealed because there is nought a chance that Sheila would sue me.]
‘From the I See.You See.We all See bank.’ She added.

‘Ha…Hi….Hi, miss Sheila. What a fine day!’ I responded excitedly. For that lady, I tell you, had greatly stirred me by then.
‘Sirr, I just checked in the system and your credit card has been blocked. All right sir?’
‘Funk!!! When did that happen?
‘Let me check the system, sir. Can I put you on hold for a minute?’
‘Sure, sure, miss Sheila!’

And then a soothing symphony was played while the butcher sharpened her axe.
The line came alive after quick two minutes.

And a flurry of messages flooded my cell phone.

‘Wait! Sheila! Why’s money getting deducted from my card?’
‘It’s normal sir. I told you, there is some error in your card. Don’t worry, the amount will be reverted within next 72 hours.’

Then, two three transactions later, lovely Miss Sheila started laughing heartily. And then the line went dead.
I have been calling that unknown number since, but it is still switched off.
I’m confident it is cell operator’s fault.

English is such a phunny language, that is.
I have absorbed that you speak english for two hours, your head start oskilating, and your carrier become danger. Last time when I speak english with my boss, I absorbed my phlow was prafect, but this time my tongue have twisted.

Then he say, ‘Suck my walls you bastard!’
‘You suck my mats!’ I say. ‘Bloody don’t talk to me like this ever, no!’
Than I give two tight hands on his right and than his left cheek. And I rezine the job, that is.

Then my mood go heavy.
I no talk anyone but only my friend, Ramesh. He is prafact subdude, that is.
He drink me child bear with non-vegetable food.
And he such a jockey man. He tell me a joke. What a joke it was. I laugh very heavy, and my head start getting circles. Then he tell me that I no worry, thousand jobs already behind me. And he tell me that my ex-boss such a dump man. So my mood go light.

I obsoletely agree with him, that is. My boss such a dump man. Bloody english medium, convent school man. I no better english than him. I no go to job with him now, never. Looser boss!

And I study advance grammar, that is. Now english unimpossible for me.
I just use double negative. ‘Unimpossible’ that is. I so cleaver, you see.
Two negative no make one right, and you still go jail. So you see, english now favourite for me, that is.

I find new job now. To build my carrier, that is. You know one? Prafect! Than tell me?

PS: English, like any other language, is perfect in itself. By this post I mean no disgrace to anyone. These are just overheard conversations in a fancy-for-english society. And a bit of my own imagination. 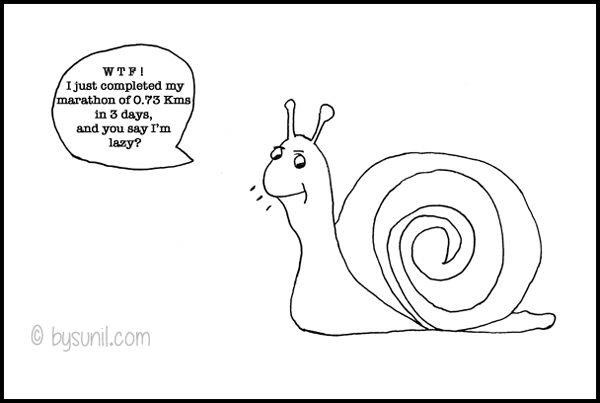 Snails have a secret life. Like the men with extramarital affair have. That is why we don’t get to see snails except in the monsoons. It bewilders me where they thrive in between the monsoons. Perhaps they stay underground, relaxing and meditating.

Now, if I told you that humans with hectic lifestyle reincarnate as snails, you won’t believe me. But what if this were true? What if extremely busy people actually did become snails in their next life?
Idle, slow, and relaxed life. Would you accept it?

Snails are lazy creature. All day they can leisure around the most ripe cherry in your garden, or stay curled up on the back walls of your house.
But their life, though small, is like one long meditation. They are never in a hurry to be somewhere, they are never worried, and they don’t have goals. They always seem to enjoy where they are and what they have.

I wish we humans could be like them, too. Slow, cogitative, and relaxed. Never in a hurry to accomplish something, never worried, and always cheerful.

So, what would you prefer? Be a snail in the next life, or a slow human in this? 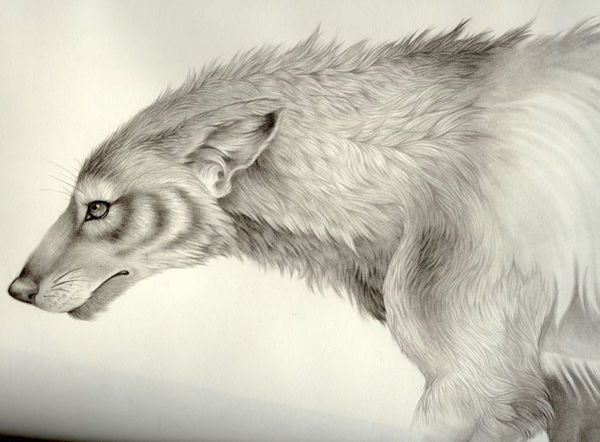 If you have spent a winter’s night in the mountains, you probably have heard the jackals cry. It is not like a bark of a dog, or a meow of a cat, but a shrill scream that cuts through the dark and unsettles you. More so because our cinema has always portrayed the jackals as bad guys. Even our tales of horror constantly feature jackals. They add that extra fright into a horror. And why not, a night is a jackal’s favourite time.

‘Listen! The jackals are crying in the afternoon. Not a good sign,’ I told my mother.
‘They are pleading to God for forgiveness,’ she replied glancing over the rim of her glasses.
‘Forgiveness; for what?’ I asked her again.
‘They say jackals cry when they feel cold,’ she said, ‘and they plead to God to do away with the winter for the night. Next day, they promise, they’ll have a warm shelter built of their own.’
‘And then?’ I asked.
‘They survive the night,’ she replied ‘and in the morning the sun warms everything and they forget to build the abode they had promised the night before.’
‘Hmm,’ I mused sitting by the room heater.
‘And the next night, they start howling again. A Jackal’s Mentality it is called,’ she added.